Where can I see it? 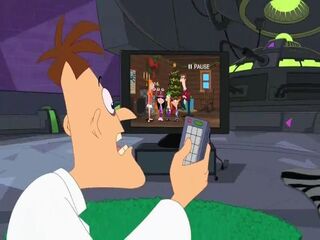 Check out the episode guides for Season 1, Season 2, Season 3, and Season 4 for original air dates and titles.

Both Disney Channel and Disney XD in the United States offer some episodes, clips, previews and songs on their websites. The selection changes on a daily basis and can be viewed on the Videos page. Most international websites also have videos.

Commercials are inserted between the episode segments and most websites limit viewership to inside a certain region.

Subscribers to Amazon Prime have access to Amazon's Instant Video service and can watch episodes for free online. The Phineas and Ferb episodes are available here.

Hulu does not offer Phineas and Ferb episodes. However, it provides a link to the Disney Video website.

The Watch Instantly section of Netflix no longer offers the entire series.

Some cable and satellite TV services include Phineas and Ferb as part of their "on demand" offerings. Check with your local company to see if it is available.

Many cable and satellite providers utilize the DisneyNow app. Videos may be watched from a computer, a smartphone, or a tablet. Live streams and full episodes are available to certified users.

Episodes may be available on video websites like YouTube, Vimeo and others if they are uploaded by individual people. However, since these are usually not authorized uploads, visitors to the Phineas and Ferb Wiki are encouraged to make use of one of the officially-supported video sites or, better yet, purchase the episodes.

As per our Video policy, videos from these websites are not allowed on this wiki.

In Spain, Season 1 and Season 2 became available on Yomvi in February 2015. In March they were replaced by seasons 3 and 4 (not counting special episodes).

Some episodes can be seen through this app.

Several episodes have been released on DVD, starting with The Fast and the Phineas. Refer to the DVDs category to see which ones are available. As of 2022, season box sets have not been released.

A more complete selection of episodes including full seasons is available through the following services. All prices listed are in US dollars and are from March 2013. Prices may change at any time and may be different in other countries, and the services may not be available in all countries.

Episodes can be purchased individually from Amazon Instant Video and the iTunes Store. They are available in SD and HD formats for $1.99 and $2.99 per half-hour episode (22 minutes without commercials), with the exception of Special episodes, which are 45 minutes (60 with commercials) and cost $2.99 and $3.99, respectively.

A volume of episodes can also be purchased for $14.99 and $19.99 for the SD and HD formats. Each volume consists of 12 or 13 half-hour episodes. While a volume is in progress (there are episodes yet to be released for it), the option to purchase a volume is called a Season Pass. Afterwards, it is called Buy Season.

As of now, the volumes are arranged as follows:

iTunes offers some other episode packs:

Though it is possible to search for episodes on the iTunes website, this will only provide a few results. The iTunes program must be used to see all available episodes and seasons.

Additional Phineas and Ferb-related items are also available through the iTunes Store, such as music, podcasts (usually free), books, and iPad/iPhone apps.

Episodes are available through Google Play and the Phineas and Ferb YouTube channel via web purchase through Google Wallet. As for YouTube, transactions cannot be made on a YouTube channel associated with a Google+ page, so the user must sign in to their main Google account's channel. On Google Play, episodes are available for $1.99, and volumes 1-9 are $14.99. Volume 10 on Google Play is $19.99. On both YouTube and Google Play, the episodes "Act Your Age" and "Last Day of Summer" are unavailable. On YouTube, each volume is considered a season.

On Google Play and YouTube, Phineas and Ferb the Movie: Across the 2nd Dimension is $7.99. On YouTube, rather than being available on the DisneyChannelShows YouTube channel, it's available on the Disney Movies On Demand YouTube channel via this link. On YouTube, for free, there's a 1:34 length movie preview of the scenes where Phineas and Ferb pick up Perry the Platypus as younger kids and Candace is in her room jealous about how Jeremy's one step ahead of her in life and going to college.