So who is this "RRabbit42" person anyway?

Well, to quote Zaphod Beeblebrox's analyst, "He's just zis guy, ya know?" A fan of Phineas and Ferb since around July 2008, I find most cartoons to be better than the prime-time shows on the networks. However, I will watch reality shows if they are about something useful instead of just being a contest (Extreme Makeover: Home Edition/Dirty Jobs/etc. versus Survivor/Big Brother/etc.).

Let's see. What else?

Ah. My user name. RRabbit42 is one that I've used for many years, going back to when AOL (America Online) was Quantum Link. It references two of my influences: Roger Rabbit and 42. Add Dr. Demento to the mix and you get someone who like parodies of songs better than the original songs that they are based on.

I think that's about it.

(I'm not a fan of Dick Tracy, but Big Boy Caprice's quote from the movie was too good not to include.) 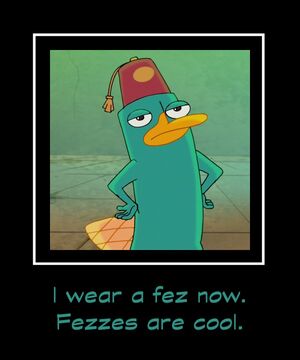 My mystery project is done. Presenting... Perry the Piggy Bank.

At the end of January 2009, I got it into my furry little head that it would be neat if I could ride a rollercoaster like the one that Phineas and Ferb built. It took about 10 days to work on it, but I think I've come up with something close.

If you own Rollercoaster Tycoon 3 and both expansion packs, I had the data files available on an old website. (It's offline now. Haven't decided if I'll make them available again or not.)

The pictures are for the billboards that appear in the game, to mark events shown in the episode, such as the snakes being released or when the coaster got caught on the Eiffel Tower.

The coaster is intended to be run in Sandbox mode. After all, Phineas and Ferb made their coaster just for their friends, not for the whole town. Before you ride it, look around. You'll see some buildings that look familiar, and one or two unexpected sights. You might even discover the Easter Egg I included.

If you'd like to learn more about this coaster or to see screen shots, check the website. If you want to discus this, hop on over to my user talk page.

Warning: if rapid movement of pictures on a monitor make you feel sick, you're going to have to watch out. This coaster is fast. I learned how to make the track go up higher than you normally are allowed to, which translates into a lot of extra speed.

Promos for the voice actors

In between shows on Disney Channel, they will run "bumpers" (little 15-second promos by the actors of a show where the actor uses a wand to draw the Disney Channel logo, or similar spots). So far, I've seen ones by Alison Stoner, Ashley Tisdale and Mitchel Musso, plus a couple of animated ones featuring Phineas, Ferb and Candace. If there's interest in seeing those, I can send the files to YouTube. -- RRabbit42 23:11, 17 December 2008 (UTC)

Just a quick list for me to keep track of what other pages I currently have in use.

Older messages and special areas I need to keep track of are in my launchpad.