Phineas, Ferb and others...

"Rollercoaster"
The Tri-State Area is the name of the metropolitan area surrounding Danville. It was founded by John P. Trystate, who united the Bi-State Area with The Adjacent Area, founded by Otto H. Adjacent. Tri-State Area Unification Day is celebrated on July 15 ("Hip Hip Parade").

Roger Doofenshmirtz is the current mayor of Danville. His brother, Heinz Doofenshmirtz often plans to create chaos in this area, not just the city of Danville itself. For such purposes, he once built a scale model of the Tri-State Area.

While describing one of his schemes, Doofenshmirtz used a magnifying glass in front of a map of the United States to reveal the Tri-State Area's location. The magnifying glass was positioned near the Denver, Colorado area, which is within driving distance of Mount Rushmore ("Flop Starz", "Candace Loses Her Head").

One scale model by Heinz Doofehnshmirtz depicts a geographical area of less than one square mile. However, another larger scale model was made by Doofenshmirtz; the scale of the model is unknown ("Toy to the World", "That Sinking Feeling").

The Tri-State Area on a map. 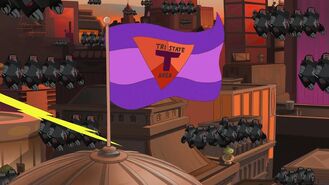