The Chronicles of Meap

"The Chronicles of Meap"

"Gaming the System"
"Thaddeus and Thor"

In the first installment in the Meap duology, an alien named Meap crashes in Phineas and Ferb's backyard. The boys repair his ship as he runs off after Candace. When Phineas, Ferb, and Isabella set off searching for Meap, they are captured by his nemesis, Mitch, and it's up to Candace and Meap to save them. At the same time, Doofenshmirtz attempts to find a long-lost companion of his.

Phineas and Ferb are playing a custom-modified game of baseball when they inadvertently shoot down a spaceship which subsequently crash-lands into their backyard. They find a small extraterrestrial life form named Meap at its controls. Meap shows them a picture of an alien and Phineas believes it is Meap's father. While they are busy trying to repair the ship, Candace encounters the spaceship, believing the boys built it, but Phineas declines. Candace then encounters Meap, believing him to be a Bango-Ru doll "roboticized" by Phineas and Ferb.

Candace and Stacy go to the Bango-Ru convention, and the latter sees Meap (mistaking him for Candace's doll) and says that he is the cutest thing she's ever seen. Candace throws away her original ugly Bango-Ru and places Meap in her backpack. Meap fires a rainbow beam from his mouth that fries the ugly doll.

Phineas, in an attempt to find Meap, has made a cute tracker. Isabella is jealous when Phineas keeps going on about how cute Meap is, never saying if she is cute or not.

Meanwhile, Perry meets Doofenshmirtz in his building, which is covered in carpeting. He activates a button that causes a claw to rub Perry on his carpets, giving him static electricity and making him puff up like a ball of fur. Doofenshmirtz tells Perry that when he was a boy, the smell of pork emanating from him was so bad that nobody would come near him. He went to the carnival and got a balloon that he named Balloony and painted a face on it. However, one day, Balloony floated away, but his father told him to stay still as a lawn gnome (referring to another backstory). Doofenshmirtz wants to bring Balloony back since balloons are attracted to static electricity.

Meanwhile in the backyard, Ferb finishes repairing the spaceship. An alien spots Meap's tricked-out spaceship, and goes down to Earth to confront it. Meanwhile, Ferb tests out the spaceship and flies off to space, during which he pays a visit to the Shooting Star Milkshake Bar to grab a milkshake.

At the convention, Meap wanders off and sees a big figure that looks like the alien in the photo (from the back at least). It is actually a security guards of some sort who is very angry at Candace for leaving her 'doll' on the floor. Meap blasts him with his mouth beam, which destroys his costume, leaving him bald and in his underwear.

Phineas and Isabella continue to look for Meap, but Isabella's presence seems to overload the "cuteness meter". Ferb arrives in the spaceship, which Phineas and Isabella board. They Candace riding home with Meap in her bicycle basket. When they are talking to her about how she found them, Mitch captures their spaceship and brings them to a space station that looks like a cloud. Ferb comments that some of the modifications he has made to the spaceship aren't "street legal". This is when Meap tells Candace that Mitch has taken Phineas and Ferb into his space station.

Mitch talks to them, saying that he has them now. Phineas, thinking that Mitch is Meap's father, introduces himself, Ferb and Isabella, and learns that Meap is Mitch's nemesis. Mitch proceeds to introduce himself to Phineas, Ferb, and Isabella, and tells them his job is to steal creatures and imprison them on his ship. Isabella tells Mitch that he should let those creatures go, but Mitch says that he will lock Phineas, Ferb, and Isabella up too. Meanwhile, Candace and Meap brainstorm about a way to get into Mitch's ship.

Doofenshmirtz puts on a sock costume to generate static electricity and uses his invention to steal everyone's balloons in the Tri-State Area, in the hopes of re-gaining Balloony.

Meanwhile, Candace attaches the remotely operated baseballs to her bicycle and flies into the space station with Meap. When she arrives, she guesses that Phineas and Ferb and Isabella will be where the "cool stuff" are. She leaves Meap in front and explores the "zoo" with Phineas, Ferb and Isabella. Meanwhile, Meap takes the other passageway and encounter his nemesis, Mitch. The two meet again; Mitch tells Meap that he is not his father, and traps him inside a container.

The static electricity and the balloons Doofenshmirtz has gathered are too strong, and they travel off with Doof and Agent P stuck to its side. They land in the same space station that Phineas, Ferb, Isabella, Meap, Candace, and Mitch are in.

Meap and Mitch are about to fight, but Doofenshmirtz crashes through the floor. Meanwhile, Perry grapples away from the balloons. Inside, Doofenshmirtz presses a button, and finds Balloony, who Mitch had found floating in space and has dubbed "Colin". They argue for it and Doofenshmirtz walks away but Balloony does not follow. Doofenshmirtz says that his balloon has changed and that he doesn't need the balloon anymore. This is when Perry manages to enter the spaceship and pushes Doofenshmirtz, who is about to call Perry his friend, off a gaping hole in the ground.

With Doofenshmirtz gone, Mitch traps Meap, and Phineas, Ferb and Isabella return to see a group of robots who are ready to attack, but Candace shoots them with the remote-controlled baseballs and they disintegrate. Realizing Meap is gone, she then asks where Meap is, Phineas tries to use his cute tracker which is having more trouble with the interference. Isabella tells Phineas that she might be the one causing the cute interference on the cute tracker and he replies it can't be her because he calibrated the cute tracker to her cuteness level. He then demonstrates what happens when he sets it back to normal, and the cute tracker breaks.

Mitch reveals himself to the gang, then sends more robots after them. While Mitch is distracted, Candace uses a baseball from Phineas and Ferb's original idea for the day to break open the container Meap is in. Meap then uses his rainbow rays to shoot the robots, and easily defeats Mitch.

Meap steals Mitch's mustache, and the gang find out that the mustache is what translated the alien language. Meap reveals (in a deep voice) that he is really a security alien that busts people that do wrong things. This is where Candace resolves to never judge a book by its cover again. Another alien arrives, which Candace thinks is a monster, and Meap introduces her as his mother in law... which (to him) makes Candace's description right. He, Candace, Phineas, Ferb, and Isabella run off to the spaceship to go back home.

Read the transcript of The Chronicles of Meap.

Teaser of next episode with Meap. 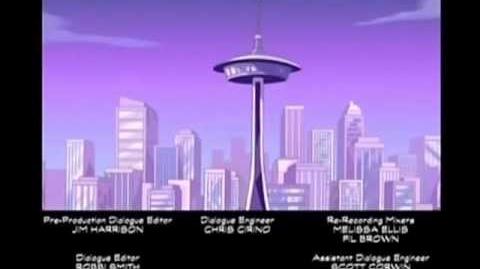 Mitch: Hahahahaha! Aren't you a little young to save the universe?
Phineas: Yes. Yes, I am.
Major Monogram: I want your hat on my desk!
(Perry throws his chair towards the screen at Major Monogram)
Dr. Doofenshmirtz: Balloony!
Mitch: Colin!
Candace: What? Jeremy's going to be there?
Narrator: The Chronicles of Meap, Episode 40.
Meap: Meap!
Narrator: Meapless in Seattle.
(In Memoriam of Don LaFontaine 08/26/40 - 09/01/08 One Man, In a land, In a time, In a world... All his own)
Narrator: In a world. There, I said it, happy?

I know what we're gonna do today

The "Too Young" Line

Oh, there you are, Perry

Perry's entrance to his lair

Perry walks near the fence and gets caught by Meap. He turns domestic just as Meap turns towards him. They have a "conversation". Perry puts back on his fedora when Meap leaves the screen. His entrance is unknown.

Main article: The Chronicles of Meap/Credits