Phineas and Ferb Wiki
Register
Don't have an account?
Sign In
Advertisement
in: Characters, Teens, Citizens of Danville,
and 4 more
English

View source
watch 02:40
'Phineas and Ferb' Lore: Stacy Hirano
Do you like this video?
Play Sound

15 (probably; she is a year older since "Doofapus")

Phineas and Ferb The Movie: Candace Against the Universe

Stacy Hirano, often nicknamed "Stace" by Candace, is the best friend of Candace Flynn and good friends with Jeremy and Jenny. She is usually heard talking to Candace on her cell phone. She is also the older sister of Ginger Hirano.

Stacy Hirano is the daughter of Dr. Hirano and an unnamed father.

Sometime in her life, when Candace was 5 or younger, Stacy met Candace Flynn and they almost immediately became the best of friends ("Phineas and Ferb Save Summer"). How they met is currently unknown. Stacy is constantly supporting Candace to bust her brothers, though it is revealed through her conversation with Jenny that she wants Candace to "give up this busting thing once and for all." ("Phineas and Ferb-Busters!") Stacy is the cool head between her and Candace, and seems to be the only one that can calm Candace down in any given situation that Candace is stressed in, whether it pertains to Jeremy or busting Phineas and Ferb. Stacy herself doesn't have any issues with Phineas and Ferb, once even insisting Candace should go on the Mix-n-Mingle machine because she believed it would help her ("Cheer Up Candace").

Stacy is shown to be very skilled in Miniature golf, becoming The Disco Miniature Golfing Queen while playing miniature golf with Phineas and Ferb while trying to bust them for Candace when Candace was sick ("Put That Putter Away").

During the Summer Rocks Festival Candace introduced Stacy to Coltrane. During the festival they started showing mutual feelings for each other. Their current relationship status is unknown. ("The Baljeatles") It is revealed in that in the future Stacy becomes the President of Uruguay. ("Phineas and Ferb's Quantum Boogaloo")

When Phineas and Ferb go around the world to try and make the longest day of summer ever, they meet Stacy's cousins and other family members when stopping in Tokyo. This shows that Stacy has Japanese descent in her family tree ("Phineas and Ferb: Summer Belongs to You!").

She discovered that Perry was a secret agent. Perry and Stacy didn't want the Flynn-Fletcher's to know about it. His identity is now kept as a secret. ("Happy Birthday, Isabella") 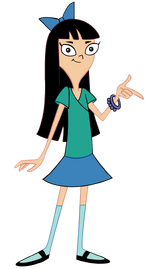 Stacy, in a similar way to Candace, has her own set of trademark clothes. This includes a teal wrap shirt, a blue skirt, light blue knee-high socks, and black Mary Jane shoes.

Stacy wears a blue bow on her head, which is her trademark look, according to Candace. Candace and Coltrane happen to like her bow. According to Candace, the bow makes Stacy look cute. ("Hide and Seek", "The Baljeatles") As to how the bow is in her hair, it is actually on a hairband. It is seen when Candace wakes her up one morning by calling her on the phone ("Phineas and Ferb: Summer Belongs to You!").

Stacy also wears a purple bracelet on her left wrist with 5 circles. She has light skin, long straight black hair, and brown eyes.

She also has a resemblance to Ginger, who is one of the Fireside Girls and her younger sister.

She and Candace are the best of friends. They are usually seen talking to each other on their cellphones or hanging out in Candace's room.

Stacy has no personal feelings for Jeremy of her own and willingly aids her in trying to get his attention. When Candace showed reluctance to call Jeremy and ask him personally to take her to the Night of the Falling Stars Girls Choice Dance, she told Candace "not to let fear rule her life", and that Jeremy wouldn't say no. ("Out to Launch") In Canderemy, Stacy wanted to spend time with Candace so she told Candace that it will be just the two of us but no Jeremy. Candace and Jeremy were connected and Stacy busted Candace

One time, she advises Candace to play "hard to get" with Jeremy. Candace at first tried to follow, but in the end ignored her. ("At the Car Wash")

Now that Candace and Jeremy are in a relationship, Stacy's role in Candace's love life has changed to giving advice to keep the relationship upheld, for which she is rarely called.

Stacy sometimes tries to help Candace bust Phineas and Ferb. Every time she tries, however, she can't help but have fun with their projects.

One example is when she was taking care of Candace when she was sick and Candace asked her to bust her brothers in her place. She was "seduced by the coolness" and joined in the project instead of getting evidence to bust them. ("Put That Putter Away").

When Stacy was in London, with the Flynn-Fletcher Family, she along with Candace participated in busting the boys using Sherlock Holmes' method of deduction. After the mystery of what they were doing was solved, however, she again decided to take part in Phineas and Ferb's big idea, which was in this case, a water slide going down from the Big Ben clock tower. ("Elementary My Dear Stacy")

Stacy once suggested Candace focus on the invention rather than the boys. As flawless as the idea seemed, however, it failed. ("Don't Even Blink")

Helping Candace with other things

Stacy is always there for Candace whenever she needs help and takes it very seriously however repetitive or irrational the situation at hand is.

She would give Candace advice on what to wear and try and boost her confidence whenever needed. ("Flop Starz", "De Plane! De Plane!")

She taught Candace how to roller-skate. Everything Candace knows about roller-skating had been picked up from Stacy. ("Crack That Whip", "Vanessassary Roughness")

She took care of Candace when she was sick and even took on her habit of trying to bust the boys. ("Put That Putter Away")

At some point, she worked on "Slushy Dawg" for helping Candace to delete some pictures from Jeremy's phone and busting Phineas and Ferb at the same time. ("The Bully Code")

Strength of Their Friendship

Stacy and Candace's friendship has proven to be very durable. Stacy continued to be Candace's best friend, even after the times Candace carelessly neglected it for her own benefit. ("Spa Day")

It was made known that Candace holds her friendship with Stacy higher than her urge to bust her brothers. ("The Lemonade Stand")

Stacy is friendly around Phineas and Ferb. She treats them nicely and agrees to participate in any of their activities, like the treehouse robots, the miniature golf course, the water slide at Big Ben and the spa.

In "Rollercoaster: The Musical!", when Phineas and Ferb started to build the rollercoaster, Phineas pointed out, "Hey check it out Ferb, we can see Stacy's house from here". Even though he could've seen any one of their friend's houses, he pointed out Stacy's. This is also possible because Stacy's house could be the farthest from their own, which is why seeing hers would mean Phineas and Ferb were really high up.

In "Phineas and Ferb: Summer Belongs to You!", when Phineas, Ferb, Candace, Isabella, Buford, and Baljeet were getting ready to fly around the world, Stacy asked Candace to say hi for her to her cousins in Tokyo. Since that's a place they would be stopping to get fuel, and when they reached their destination, Candace said to Phineas, "Stacy has family down there, we should visit", Phineas responded, "We're one step ahead of ya, Candace", meaning the boys overheard Stacy tell Candace to see her cousins, and that they were already planning to see them. Also, Phineas complemented that Stacy has a lot of cousins. Then, when Ferb introduced them to her family, Stacy's grandmother yelled to her family that "Phineas and Ferb are here", means that Stacy has talked to her family about them, indicating that she considers them her friends.

In "Der Kinderlumper", when Stacy said she's "gonna go be famous by association", Phineas commented to Ferb, "Wow, and to think, we knew Stacy before she was famous by association", possibly being fond that him and Ferb already knew her. Also, after Phineas, Ferb, Isabella, Buford, and Baljeet were stampeded by the chinchillas, Stacy, when she saw Phineas and Ferb stampeded, she saw this and yelled, "Oh no!, Phineas and Ferb!", possibly indicating that she cares for the safety of the boys. Afterwards, when Stacy was stampeded a small time after, all of them were seen running to Candace. Probably meaning that the boys made sure Stacy was ok before running to find Candace.

The two later formally introduce themselves to each other at the summer rock camp where Coltrane works as an instructor. They immediately show mutual attraction to each other, including dancing with each other during The Baljeatles' concert and holding hands afterward. ("The Baljeatles"). She was happy for receiving a call from him in "Candace Gets Busted". They are also seen dancing together in "Happy New Year!". Coltrane mentioned Stacy being his girlfriend in "Mandace".

Dr. Hirano is Stacy's mother. She is also a doctor, and was the one who removed Isabella's tonsils ("I Scream, You Scream").

She forbids Stacy to go to the Tiny Cowboy Concert with Candace because she thinks that Candace is immature and unfocused. But when she sees how Candace is focused when she tries to bust the boys, she gives Stacy permission to go to the concert with her, in the hopes that Stacy one day grows up to be like Candace ("Robot Rodeo").

Jeremy is friends with Stacy. Stacy helps Candace get his attention, and provides her with advice on how to deal with her attraction towards him. He called Stacy "Staceroo" at Summer Rocks ("The Baljeatles"), which made Candace angry with him.

During the alien invasion, Stacy hides in Jeremy's food truck, where, somehow, he already has two gas masks. Stacy also finds out about Jeremy's secret passion for cosplay and LARPing, and she teases him because of this. (Phineas and Ferb The Movie: Candace Against the Universe)

Stacy is also close friends with Jenny, but not much is known about their friendship due to the fact that Jenny doesn't appear on the show much. However, when Jenny does appear, Stacy appears to act towards her in a generally friendly manner. ("Day of the Living Gelatin", "Phineas and Ferb-Busters!", "Rollercoaster: The Musical!", "Candace Gets Busted")

Stacy first met Chad during the management seminar. They liked each other and went out later. ("The Secret of Success")

Ginger is Stacy's younger sister. It's unclear what they think of each other as most of their visible interaction is when Phineas and Ferb are doing one of their Big Ideas. They first interacted as sisters in "For Your Ice Only", where Ginger was waiting impatiently for her older sister to get off the computer. There is also some sibling rivalry as Ginger has a bigger trophy shelf than Stacy, who has yet to win any trophies. However, Ginger said she won the trophies to impress Stacy. ("One Good Turn")

In "Happy Birthday, Isabella", Stacy witnesses Perry and Doofenshmirtz in battle and learns that Perry is a secret agent. Perry shows her the O.W.C.A. pamphlet which informs her that if an agent's host family learns of their pet's dual identity, they must have their memory erased, or else the pet be relocated to a new host family. However, Stacy convinces Perry to let her keep her memory on the technicality that she is not a member of the Flynn-Fletcher family. They agree to keep her knowledge of him as an agent secret from the O.W.C.A. and the Flynn-Fletchers.

Stacy first meets Vanessa in Druselsteinoween, when she and Candace were talking. Later on, she helps Vanessa keep her dating Monty a secret from Francis Monogram.