Runaway Hit is the second chapter book in the Phineas and Ferb book series based on the show. This book is the print adaptation of "Flop Starz" and "Lights, Candace, Action!". It was released on January 6, 2009.

Auditions for Flop Starz! are in town and Candace is determined to make the cut. But she didn't count on Phineas and Ferb throwing their creative hat into the ring. And as if that weren't enough, the next day Candace's dreams to become a famous movie star change to nightmares when it turns out Phineas and Ferb are directing the vehicle for her debut! This time Candace will stop at nothing to show her mom just how Phineas and Ferb are spending their days—and ruining her life! Meanwhile, Dr. Doofenshmirtz has created a machine that will shrink everything he dislikes. Will this mean the end for Perry the Platypus?

Phineas and Ferb's sister, Candace, is determined to be the next Super American Pop Teen Idol Star. But her plans for fame are foiled when Phineas and Ferb hit the stage with their band. Then Candace's dream of becoming a famous movie star turns into a nightmare when Phineas and Ferb are chosen to direct her in her breakout role. Will she ever best her brothers at their own game?

Doofenshmirtz quote: "Ah, Perry the Platypus. You're no match for my Age-Accelerator-inator!"

Don't miss the fun in the next Phineas & Ferb book... RUNAWAY HIT Adapted by Laura Bergen
Based on the series created by Dan Povenmire & Jeff "Swampy" Marsh

It was the start of another potentially boring summer day in the lives of Phineas Flynn and Ferb Fletcher. As they ate their breakfasts, a painfully bad Super American Pop Teen Idol Star contestant was croaking out a song on the kitchen TV. Phineas and Ferb listened as they dug into their second bowls of Sugar POWs and their mom, Linda, helped herself to her fourth cup of coffee. Phineas's sister (and Ferb's stepsister), Candace, was searching in the refrigerator.

"I... met my love in a—" the boy on the show belted out at the top of his lungs, sounding a lot like a human bagpipe, only worse.

As the boys watched, a big boxing glove shout out of nowhere and—BOOM!—whacked the contestant off the stage.

"Oh, boy!" cried the announcer. "Did that kid stink or what? Ha!" He laughed and shook his head, then grinned and pointed at the camera. "But maybe you've got what it takes to be..." as he spoke, the words flashed onto the screen: "...the next...Super...American...Pop...Teen...Idol...Star! Auditions open today at the Googolplex Mall in beautiful downtown Danville!"

Candace immediately gave up her search for a raspberry yogurt and ran to the television. "Auditions! Today!" Her heart was pounding in her chest. Was it possible? Was her favorite show really having auditions at the local mall?

"Yes!" Candace lifted the TV off the counter and planted a big wet kiss in the middle of the screen. "Mwaahh! I've got to tell Stacy!" She dashed off to her room to call her best friend right away. After all, opportunities like this didn't just up and land in a girl's very own hometown every day!

Unfortunately, Candace forgot that she was still holding the television set. And it was still plugged into the wall...

"Oh!" she cried, as her arms flew back and—THONK!—her rear end hit the floor.

Phineas and Ferb glanced at Candace from their seats at the kitchen table to see what all the noise was about. Then they went back to eating their cereal.

"That pop-star stuff might be fun at first," said Phineas between spoonfuls. "But then you'd be stuck in a dead-end job. Too bad you can't just do it once and move on."

"Well, what you're talking about," said Linda, taking another sip of coffee, "is a one-hit wonder." She walked over to the counter and stood next to the TV.

"A one-hit wonder?" said Phineas, looking up. "Fеrb," he said excitedly. "I know what we're going to do today!"

Excerpts of copyrighted sources are included for review purposes only, without any intention of infringement.

Runaway Hit is a near word-for-word adaptation of the episodes "Flop Starz" and "Lights, Candace, Action!", presented as Part One and Part Two. The book makes the transition from Part One to Part Two with the simple phrase, "It was another sunny summer morning". Differences between the book and the episodes as broadcast are noted below. In general, most of the differences are that of timing, where an event is described as happening at a slightly different time (usually before) than when it happened in the episode, though some lines are missing from the episode.

Each page typically has a picture from the episode that helps the reader visualize what is being described. The picture is a halftone screenshot from the episode (taken from the wide format originals), cropped into custom shapes such as rectangles with cut-out corners or elipses. Each chapter includes a picture of Phineas and Ferb at the beginning of the chapter, and Perry's image appears next to each page number.

Chapter opener image for Part One 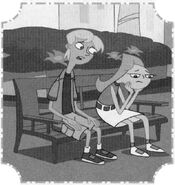 One of the images used for Part One

One of the images used for Part Two

Back cover
Add a photo to this gallery

Differences between the book and the episodes

Most timing differences, where an event occurs in the book a few moments before when it does in the episode, will not be noted here.

Retrieved from "https://phineasandferb.fandom.com/wiki/Runaway_Hit?oldid=689062"
Community content is available under CC-BY-SA unless otherwise noted.