Phineas and Ferb: Rockin' and Rollin'

Song by Swampy and the Marsh-mellows

Phineas and Ferb: Rockin' and Rollin'

Swampy and the Marsh-mellows (CD) chronology

Platypus Walk is a song and a dance tied in to the 2012 Platypus Day promotion. It was released on March 3, 2012, in a music video, but a promo with the song had been airing since February 7, on Disney Channel and Disney XD. It is played in "Last Day of Summer".

If you're web-footed, duckbilled and semi-aquatic,
If you're soft, cool, fuzzy and charismatic,
Disappear by day kinda enigmatic
Then you just might be a plata-fanatic.

(Walk the platypus walk)
You can be a platypus who doesn't do much
Or put on your fedora and come through in the clutch
Get yourself a mission, fire up your jetpack
Keep your duckbill forward and your beaver tail back.

Agent P leading (much to Doof's chagrin) a flash mob in Ft. Lauderdale, Florida in The Platypus Dance. 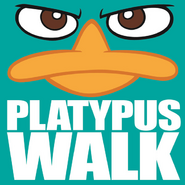 Info on the single