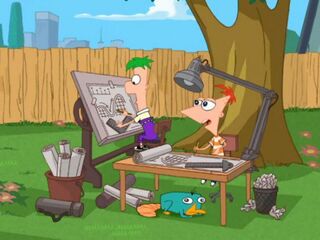 To help ensure that pages on the Phineas and Ferb Wiki have a consistent look and writing style, the following information is available.

Articles should be written as if you are there watching the events take place as they happen, and should indicate some familiarity with the characters. This is called "writing in-universe". For the most part, descriptions are written in present tense, though past tense may also be used when describing a historical event shown in an episode.

Example: Phineas and Ferb are sitting under a tree, wondering what to do today.

Contrast this with: In the episode "Rollercoaster", Phineas Flynn and Ferb Fletcher were sitting under a tree.

In some countries, it is common to refer to people by their surname (last name or family name), such as "Fletcher" instead of "Ferb". For this Wiki, please use first names whenever possible. Full names are usually only listed on the page for the character itself.

For more information, refer to Point of view.

The Manual of Style covers the technical aspects of how an article should be written. Topics include:

Canon material refers to what sources of information we consider as being an official part of the Phineas and Ferb universe. A forum has been created to discuss what material is acceptable as an official source.

Additional information about the term canon can be found on Wikipedia.

Templates are used to provide a quick way of linking to a large amount of information. Additional information about Templates is provided on the Reference materials page.