Phineas and Ferb Ride Again is a Nintendo DS video game adaptation of the animated series, Phineas and Ferb, and the sequel to the first game. It was announced May 20, 2010.

In this new action platformer game, players will be able to construct and race awesome new rides like skateboards and mine carts, complete puzzles and participate in 12 zany mini-games to build and upgrade new gadgets such as jet packs and tractor beams. Fantastic action sequences including cool boss battles with Agent P will add brand new elements not seen in the first game. Players will also have the opportunity to gather various collectibles around the world, as well as play in four new bonus levels.

The game will also feature many notable characters from the hit TV show including Baljeet, Buford, Isabella and many more. Secret Agent P, Phineas and Ferb's pet platypus, will have plans of his own as he battles Dr. D and his evil creations including the Norm Robots using his cool new gadgets for battle. Candace will also be around with new "You're So Busted" mini games where the boys use trampolines, turtles and sinking logs to get away from her.

Three known adventures are building a skate park, the car wash, and helping Meap fix his ship. One level is possibly in the Danville Woods, meaning that it may either be in "Get That Bigfoot Outa My Face!" or "The Ballad of Badbeard".[1]

There are four different adventures. The player can build a skate park, fix Meap's ship and battle aliens/robots, race using mine carts, and surfing. Custom parts can be added that will upgrade the player's vehicle and even let them go to other places such as space, Atlantis, and hidden tracks.

Changes from the first game 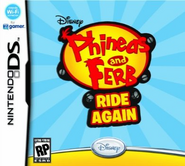