Cast of Phineas and Ferb chronology

Phineas and Ferb Summer Belongs to You!

Phineas and Ferb: Across the 1st and 2nd Dimensions

The CD has all 7 songs from the Phineas and Ferb Christmas Vacation! Soundtrack which was released digitally, in addition, there is one extra song called "What Does He Want?" performed by Candace. This song was supposed to be in "Phineas and Ferb Christmas Vacation!" but was taken out in order to fit the 45 minute time slot. In addition there are the 3 songs of "A Phineas and Ferb Family Christmas" (despite the fact that the album was released over a year before that episode aired) and also 5 classic Christmas Carols sung by Characters from the show. For example, Vanessa sings "The Christmas Song (Chestnuts Roasting on an Open Fire)" and Monogram and Carl sing their own version of "Frosty the Snowman".

A European Spanish version has been announced to be released the 9th, november, 2010. It is called "Phineas y Ferb: Navidades con Perry", a rough translation of "Phineas and Ferb: A Very Perry Christmas". The title literaly means "Phineas and Ferb: Christmas with Perry".

The U.S. Billboard charts are released nine days before the listed chart date (for example, the Week of October 16 chart was released on October 7). Bold represents the highest ranking to date. 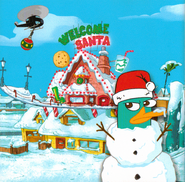 Illustration of Perry and Phineas and Ferb's house in the CD. 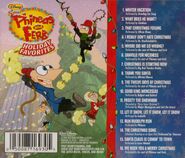 Back of the CD 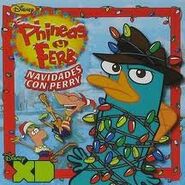 Cover of the Spanish version
Add a photo to this gallery

Retrieved from "https://phineasandferb.fandom.com/wiki/Phineas_and_Ferb_Holiday_Favorites?oldid=715952"
Community content is available under CC-BY-SA unless otherwise noted.