Phineas and Ferb is a video game for the Nintendo DS based on the TV show of the same name. It was later followed by Ride Again in 2010.

You control Phineas and Ferb throughout the game. Phineas can open up toolboxes, scavenge for spare parts, communicate to other characters, access Perry to save the game, and blow on birds' nests to find items to prevent Candace from finding out what they're up to. Ferb can repair broken objects and use the vacuum to suck up parts for a course. When Ferb encounters a broken object, the player is assigned a task from hammering nails to using a jackhammer to break rocks. Ferb can also pick up or smash heavy objects in the way.

In each level, Phineas and Ferb will have to find spare parts in order to fulfill what they wanna do today. The boys can also use items to help them locate parts, or to hinder Candace when trying to bust them. However, the boys can only hold up to two items from their backpack. After they've acquired the parts needed, they'll head to the Summer Fun festival to construct their course and vehicle. In the course, Phineas and Ferb will have to avoid obstacles and obtain stars during the run. The level is completed when the boys obtain a certain number of stars.

In the top screen is Candace's busted meter. As Phineas and Ferb progress the level, Candace's meter will keep rising as they go along. When the meter is full, Candace will say 'You're so busted!' and then Phineas, Ferb, and Candace will be escorted to a labyrinth stage. Phineas and Ferb will have to avoid Candace at all costs, they can use bushes to hide for a short time, and toolboxes contain Jeremy statues to distract Candace. If the boys obtain all the bolts on the stage, they will go back to the last place Candace calls. However, if they're caught three times by Candace in the stage, the game is over. The four levels of the game are based on the episodes, "Rollercoaster", "S'Winter", "It's a Mud, Mud, Mud, Mud World", and "Leave the Busting to Us!". 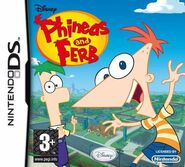 The Disney Channel series, a favorite among kids 6-18, inspires its first video game

BURBANK, Calif., (October 2, 2008) – Disney Interactive Studios has announced Phineas and Ferb for Nintendo DS ™, inspired by the hit Disney Channel series, is targeted for release in early 2009. The game will help cure winter blues as fans join Phineas Flynn and stepbrother Ferb Fletcher as they set out to conquer boredom during their summer vacation. The game's debut on Nintendo DS will coincide with the show's second season premiere on the Disney Channel.

This Nintendo DS game is a zany fun-filled adventure for players, as they help Phineas and Ferb build an outrageous rollercoaster, create a snow course in the middle of summer and race cool monster trucks through obstacles. Players collect cool gadgets and objects that provide special abilities and powers, as well as compete in mini-games and solve puzzles to complete their missions.

As with the Disney Channel series, the brothers' bold escapades always end up frustrating Candace, their teenage tattletale sister. Try as she might to show Mom what Phineas and Ferb get away with, she never quite succeeds. Meanwhile, the family's simple-minded pet platypus leads a double life as secret "Agent P," battling the evil Dr. Doofenshmirtz to save the world.

Disney Interactive Studios created Phineas and Ferb for boys and girls ages 6-11, who have made the series the top rated basic cable program for this age group. The game also features DGamer, Disney's new online community designed exclusively for Disney gamers. DGamer allows players to engage with other Disney game players in a secure online community via their Nintendo Wi-Fi Connection or online at www.DGamer.com. The service allows users to log into their DS and online accounts to create and customize a unique 3-D avatar and persistent profile. Kids can chat, view user profiles of their DGamer friends, and post high scores to leaderboards.

Published by Disney Interactive Studios and developed by Altron, Phineas and Ferb for Nintendo DS will be released early 2009.

© Disney. Product names, release dates and features may be subject to change.