Cory in the House
The Game Plan
Mostly Ghostly: Who Let the Ghosts Out?
Life with Boys

Madison Michelle Pettis (born July 22, 1998) is an American actress. In Phineas and Ferb, she voices Adyson Sweetwater, one of the Fireside Girls. She is known for playing the role of Sophie in Cory in the House. She has also starred in Mostly Ghostly: Who Let the Ghosts Out? as a ghost.

She appeared as one of the 5th graders on Are You Smarter Than a Fifth Grader? for the 2008 series. She currently voices Izzy in Jake and the Never Land Pirates, a Disney Junior series, and appears in the sitcom Life With Boys.

Madison Pettis was born in Arlington, Texas, to Steven and Michelle Pettis. Her father is African-American and her mother is of Irish, French and Italian descent.[1] Pettis was first noticed when her mother entered into an annual cover search held by FortWorthChild, a local parenting magazine. From that she began modeling and acting in commercials; she had an agent and a website from the age of five.[2] She had a co-starring role in the Disney Channel Original Series, Cory in the House as the President's daughter, Sophie Martinez, also known as "America's Angel". In this role she was seen in one episode of Hannah Montana. She also starred as Peyton Kelly in the 2007 Disney movie, The Game Plan. She portrayed Isabelle Tyler in an episode of The 4400. She was the 2007 Disney Channel Games commentator, and also appeared on Barney & Friends as Bridget, in which she sang, danced and acted. In 2008, she cameoed in Dr. Seuss' Horton Hears a Who!, and had roles in Mostly Ghostly: Who Let the Ghosts Out? and A Muppets Christmas: Letters to Santa. Pettis also had a small role in Seven Pounds as Lorena. She has a voice role in the Disney Channel animated series Special Agent Oso. In 2009, Pettis had a role in Free Style as Bailey Bryant with Corbin Bleu and appeared as herself on the syndicated version of the game show Are You Smarter Than a 5th Grader?. She is now a model with LovePastry and is has a Disney Junior show Jake and the Never Land Pirates. She also plays the role of Janelle who is Leo's girlfriend from Disney XD's live action comedy show Lab Rats during the episodes "Can I Borrow the Helicopter?", "Back from the Future", "Air Leo", "Avalanche", "Prank You Very Much", and "Mission: Mission Creek High". 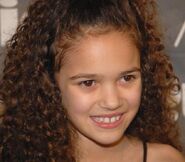 Retrieved from "https://phineasandferb.fandom.com/wiki/Madison_Pettis?oldid=679578"
Community content is available under CC-BY-SA unless otherwise noted.