Learn to Draw Phineas and Ferb

Learn to Draw Phineas and Ferb is a book that was released on August 1, 2011.

School is out for summer, and stepbrothers Phineas and Ferb decide to make each day an adventure! Their bold escapades always end up cramping the style of their teenaged sister, Candace, who makes every attempt to expose mom to what is really going on, but somehow always seems to fail. Meanwhile, the family's simple-minded pet platypus leads a double life as secret "Agent P" and faces off with the evil Dr. Doofenshmirtz to save the world. Now young fans will enjoy learning to draw all of their favorite characters from this animated adventure show using an easy-to-follow step-by-step method of instruction. This beautifully illustrated, full-color 64-page book also features a brief synopsis of the show and professional tips from real Disney artists.

Pictures from different episodes are shown in the synopsis: 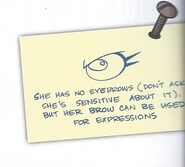 Retrieved from "https://phineasandferb.fandom.com/wiki/Learn_to_Draw_Phineas_and_Ferb?oldid=625433"
Community content is available under CC-BY-SA unless otherwise noted.