Phineas and Ferb Wiki
Register
Don't have an account?
Sign In
Advertisement
in: Characters, Animals, O.W.C.A.,
and 4 more
English

Gary the Gander, codenamed Agent G, is a secret agent gander working for the O.W.C.A. In the O.W.C.A, his superior seems to be Major Monogram.

Gary the Gander disappeared for an extended period of time. Nobody could find him in the past. Major Monogram tells Agent P he might be in Iceland, Monte Carlo, Burbank (CA), or the Moon. Agent P found him taking a vacation in a tropical island shortly after Agent P went to the moon ("Undercover Carl").

Seen after Agent P brings him back to the O.W.C.A, he acts ashamed after performing awkward acts such as returning to the O.W.C.A. after a long period of time.

Gary is a goose white feathers, an orange beak, and orange webbed feet. He has also been seen wearing a pink lei and a fedora on and off duty similar to Agent P's.

Originally used as the focus of a wild goose chase for Agent P, he seemed to have not seen him in a very long time.

Perry was assigned a mission by Major Monogram to find him and succeeded. 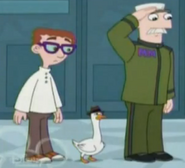