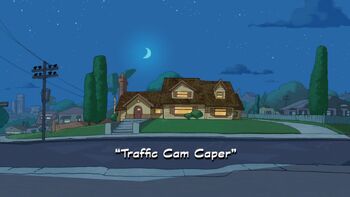 A traffic camera DVD in the neighborhood gives Candace photographic proof of her brothers' activities, but Agent P is sent on a mission to destroy that DVD, because it has recorded his comings and goings as a secret agent. To do that, he needs to get some help from a familiar robot created by a familiar scientist.

Candace explains to her parents the boys built an elevator to the moon.

Phineas and Ferb bring back proof of their moon trip, but the parents still don't believe her.

Lawrence gets a traffic ticket from that camera across the block.

Their elevator to the moon.

The roller coaster from the first episode.

Unknown to Candace, Perry leaves on one of his assignments.

Phineas suggests they show their mom all the stuff they did during the summer so far.

Linda tells the kids she's too tired and she'll see it tomorrow morning.

Lawrence's traffic ticket have been cleared.
Add a photo to this gallery

Doofenshirmirtz with a grind guard in his mouth.

"You just want to borrow Norm? Fine, knock yourself out."

My name is Norm

Norm steals the disk and gets away.

Phineas and Ferb offer to get the disk back for Candace at the risk of getting busted.

"Good thing we got this extra rocket engine, huh?"

"Someone forgot to replace the oil cap!"

Norm about to do the splits

Ferb attempts to get the disk, but is thrown off.

Phineas get the disk back from Norm.

Candace saves Phineas from falling despite losing the evidence to bust them.

"You may be a pain, but you are my brother."

Candace and Phineas sees that Ferb got the disk, but suddenly flies away.

"What did I miss?"
Add a photo to this gallery

Perry is needed at HQ.

Perry's enters into his lair by a magician's hat.

Perry is ordered to steal the camera's disk to protect his identity.

Monogram, Carl and the other agents at the table.

Carl gets rid of the disk.

Norm participates in the song.

Norm is fired afterwards.
Add a photo to this gallery

Retrieved from "https://phineasandferb.fandom.com/wiki/Gallery:Traffic_Cam_Caper?oldid=634809"
Community content is available under CC-BY-SA unless otherwise noted.