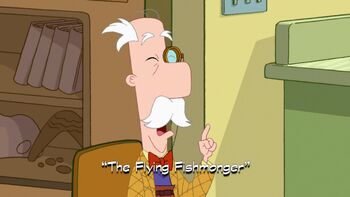 Phineas and Ferb help their grandfather relive his glory days as a daredevil. Dr. Doofenshmirtz seeks revenge against a childhood bully that always kicked sand on him.

His jump over his mom's tea society party.

He then jumps over a pile of crumpets.

And finally over the Queen Mum.

The Holy Mackerel is now just a makeshift lamp.

Candace shows Winifred around the mall.

Candace calls Stacy to see what her brothers are doing.

Ferb restores the mackerel in the garage.

He then stops to eat a grilled cheese sandwich.

Isabella brings a toy for Perry.

Carl briefs Perry despite the closeup being too close.

"What's all the kerfuffle, lads?"

"You can open your eyes now."

Phineas and Ferb want to jump the gorge, so they add sidecars.

Lawrence, Winifred and Linda are impressed with Candace's new outfit.

Candace in a British outfit.

"Mom! The Boys built a gorge in the backyard!"

"That hat must be a bit too tight."

Perry gets stuck to some flypaper on the floor.

Heinz as a boy meeting Boris the bully.

He gets sand kicked in his eyes.

Heinz on his first date. But Boris is right behind him.

He even hassles him while trying to balance his checkbook!

While he didn't show up at the beach, Doofenshmirtz still gets paranoid.

Baljeet attracts a girl with his fish costume.

And they both proceed to pass flyers in fish costumes.

A paperboy also passes newspapers about the event.

The family is prepared to jump the gorge.

The Fireside Girls play the old theme, which causes it to rain.

Phineas suggests that they should play the theme in a more exciting way to stop the rain.

Isabella tells her troop to crank it up a notch.

The updated theme makes the rain go away.

Everyone singing the song.

One of Ferb's modifications to the Holy Mackerel.

"Can we speed up this pony ride a little?"

"Honey, I'll have you ladies home in two shakes of a lamb's tail."

That was a close one.

And after a long trip, they finally jump the gorge.

"Ha! You guys are sooooo busted"

"It's better than I thought!"

"There's no way you're gonna get out of this one!"

A strong gust of wind blows the sand he was about to dump onto Boris into him.

The Fireside Girls replay the old theme one more time for Reginald.

"These two have really done it this time, Mom."

"Look at what they did to the backyard!"

"You guys made the lawn look great!"

And she fails to bust her brothers yet again.

"I have absolutely no idea."

To return to the "The Flying Fishmonger" episode summary, click here.

Retrieved from "https://phineasandferb.fandom.com/wiki/Gallery:The_Flying_Fishmonger?oldid=665764"
Community content is available under CC-BY-SA unless otherwise noted.