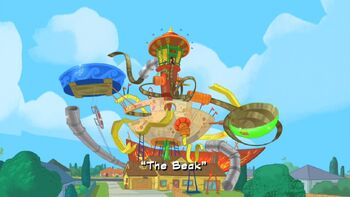 Khaka Peü Peü arrives in Danville to challenge Phineas and Ferb after the boys are mistaken as a superhero (while wearing an indestructible suit they designed to safely conquer their newly built extreme skate-track) known as The Beak. With the super villain wreaking havoc, it's up to Phineas and Ferb to thwart him while Dr. Doofenshmirtz tells the people of the Tri-State area that he is in charge, in hopes that they will actually just go along with it. Meanwhile, his brother Roger is worried that everyone will blame him for the recent super villain catastrophe so he decides to make Doofenshmirtz Mayor.

Events in The Beak

Linda at the dentist.

Candace is trying to tell her mom her brothers built a skateboard course.

However, she's going to get a root canal and can't come.

Phineas and Ferb decide to build a protection suit for the course.

Monogram tells Perry Doofenshmirtz has became the mayor of Danville.

"I'm Heinz Doofeshmirtz and I approved this evil message."

Monogram and Carl put on their disguises.

The boys put the finishing touches on their suit.

Phineas mans the top half of the suit...

And Ferb controls the lower half.

The suit is ready!

Phineas hears a cry for help.

The Beak awkwardly flies to the rescue.

Isabella wonders where Phineas and Ferb are.

"I have your favorite math problems!"

The Beak saves Baljeet when he falls.

Doofenshmirtz's hostages: His brother. his building supervisor and a crossing guard.

"This was the best I could do?"

The other captives leave as well.

And Doof gets a chair thrown at him.

And he tries to explain to Agent P what really happened.

They fly around the course, using the grapple to help them land.

And the course gets destroyed.

Phineas and Ferb use their suit to clean up.

Candace reads about The Beak.

"Phineas, you let me down."

He then argues with his wife...

Who then throws a chair at him.

Roger is worried this will harm his reputation.

He decides to let Heinz take the fall for everything.

"Phineas, where are you?

Isabella looks admiringly at The Beak as he departs.

And the course gets destroyed.

The Beak is knocked out from Khaka's attack.

The Khaka Crawler then gets tied up and then destroyed.

The crawler gets electrocuted.

The Beak defeats Khaka, but he escapes.

Isabella tries to interview the Beak, but he flees instead.

Isabella swoons over the beak.

Doofenshmirtz tells Perry he was faking taking over the Tri-State Area.

Perry is shocked to realize that Roger is giving Heinz control of Danville for real.

After trapping Perry, he takes over as Mayor.

Doof sees a HUGE stack of paperwork Melanie gives him.

Heinz is extreme angry that Khaka is taking over his role as a villain threatening Danville.

When she can't get info on the Beak from them, she goes off on her own.

Phineas and Ferb hatch from the egg.

Khaka dumps some fish bait on top the the city.

The Beak uses the vacuum cleaner from Abandoned Vacuum Cleaner factory to clean up the mess.

Khaka releases birds over the city.

The Beak catches them all in a net.

Stacy reads about the Beak in the Fireside Girls gazette.

She then wants Stacy to be her sidekick.

"It's up to the Dangiraffe!"

"Sorry I lost your bike."

Khaka appears above Isabella and the Boys.

He then squirts water over the citizens.

Phineas tells Isabella they have to leave again.

"Don't you leave me, Phineas! PHINEAS!"

Doof hangs Perry up as a plaque in his office.

He mistakes his stapler for an answering machine.

He offers her aid to stop the Beak together.

The Beak surrenders when he sees Khaka with Candace.

She gets offended when Khaka calls her his henchman.

Heinz sees the Beak outside.

...but Isabella falls from the top of City Hall!

Khaka zaps a sign with his laser to crush some citizens below.

But Isabella is losing her grip!

"What happened to The Beak?"

"Thanks for saving me, Phineas!"

Ferb pilots the suit on his own and destroys the sign.

A crowd cheers the heroic exploits of The Beak.

Isabella gasps when she sees Phineas jump off the building.

The Beak throws Khaka into a building.

Isabella learns Phineas is The Beak.

His wife throws another chair at him.

"Let the master show you how it's done.

Perry purses him in the Beak suit.

Perry causes the suit to crash into the ship.

Perry lands in the carriage pushed by Monogram.

Linda's vision is no longer blurry.

Isabella tells Phineas he was brave.

"I guess there's no glory in thighs."

Phineas and Ferb are ready to attempt their skateboard course.

which gets smashed by hammers...

...and explodes.
Add a photo to this gallery

The Beak on the skateboard course

"Time for a test drive."

To return to the "The Beak" episode summary, click here.

Retrieved from "https://phineasandferb.fandom.com/wiki/Gallery:The_Beak?oldid=628527"
Community content is available under CC-BY-SA unless otherwise noted.