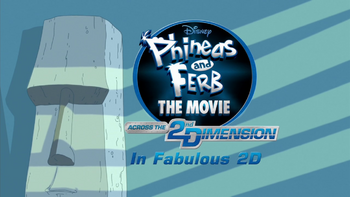 Phineas and Ferb discover that their beloved pet platypus, Perry, is really a secret agent who battles the forces of evil daily. The boys team up with Perry on a grand adventure through a parallel universe where they must ultimately thwart an even more evil version of Dr. Doofenshmirtz.

Yeah? Well, welcome to my life!
Add a photo to this gallery

"This is gonna be the best day ever!"

"We consider every day a plus to spend it with a platypus."

"When we're brushing our teeth..."

"Like we're a cheese sandwich and he's the cheddar."

"...when you start it with a monotreme."

"Did somebody lose a ball?"

Phineas commending that the building looks a lot like Ferb's head

Doof starting up his Other-Dimension-inator (to no avail)

"Well, I just fixed it, it can't be broken already."

Phineas apologizing for the damages he and Ferb caused

Phineas and Ferb offering to help Doofenshmirtz repair the machine

Perry being forced to remain in pet mode

Perry biting Doof's finger (much to Phineas and Ferb's anger)

"You know, it's kinda weird, I'm usually thwarted by this point. I guess he's not coming."

Doof starts up his inator, which finally powers up for realsies

".....the mind-blowing first images beyond our dimensional reality!!"

Doof watches in delight as his machine is finally working

Phineas and Ferb are doing the same

Perry gets uncomfortable by this turn of event

"Let's swap my couch for that one!"

Doof entering through the portal into the other dimension

Aerial view of 2nd Dimension with Doofenshmirtz as their leader.

Alternative Doofenshmirtz statue as their leader.

Everyone gets off the train.

"A whole Tri-State Area where I am already in charge! Yeah!"

Doof is delighted that he actually succeeded on his scheme for once.

"Oh, you're from another dimension? Well then, he'll probably want to see you, he's into that freaky sorta stuff.

Bask in his glory, Kneel at his feet

You're in for such a treat

Doofemshmirtz stops at the 2nd desk of Doofenshmirtz 2.

A chair unveils the alternative leader of the Tri-State Area.

"Alright, who's interrupting my..."

Two Doofenshmirtzs get up to switch seats

They stand up and starting to switch seats.

Two Doofenshmirtzs go back to their original spots where they're from.

"Yeah, I'm you from another dimension."

"Well that would explain the handsomeness."

"Does that mean you and I are exactly alike?"

Do you want some rice pudding?

It was a test.

Ooh, I love it the most!

Do you collect coins?

Both Doofenshmirtzs dancing with their hats and canes inclunding the Vending Machines.

I've been alone all these years, with my irrational fears.

But now before me I see, someone with whom I agree.

As Sherlock Holmes and Watson

As Laverne and Shirley

as Ralph and Ed

I thought I be taller.

I've been told I slouch. I though I had both my eyes.

It's in this pouch.

"Ouch! You know, I can't help but notice that your scar goes over your eye-patch."

Do Lamas wear you out?

Are they camels or sheep?

And now before me I see, someone with whom I agree.

Coming at you Fridays!
Add a photo to this gallery

"So what you're telling me is you're still not ruler of your Tri-State Area?"

"Well obviously YOU did not have to deal with MY nemesis, Perry the Platypus!"

He turns his head to observe 2nd Dimension Doof's invention.

Doofenshmirtz looks shocked and surprised due to his satisfaction.

"He was once my nemesis, but now, he is general of my army!"

"Ugh, now who's interrupting me?"

"Remind me to berate my Indentured Executive Assistant!"

"You dare to bring a secret agent in here?"

"This boy's a secret agent?"

"You, you really think that he's your pet, don't you?"

Perry remaining in pet mode, despite Doof-2 exclaiming his true identity to the boys

2nd Dimension Doofenshmirtz points up to call his General

"General Platyborg, come down here at once!"

2nd Dimension Doofenshmirtz points exactly for the General leader to be here.

2nd Dimension Doofenshmirtz yelps in pain after Perry the Platyborg steps his foot by accident.

2nd Dimension Doofenshmirtz glares and looks at Perry the Platypus

2nd Dimension Doof puts his hurt foot down after his sidekick accidentally lands on his foot.

Platyborg hits Perry (to no avail).

"Wait, let me try something."

Perry finally blows his cover as Platyborg is about to attack the boys.

"Why does their platypus fight so good?"

2nd Doof points to the boys from the 1st Dimension.

The Norm Bots charge at the boys under 2nd Dimension Doof's orders.

2nd Dimension Doofenshmirtz turns his head to his minion robots

"Hey, be careful with that!"

"He doesn't really know this guy."

Phineas is mad at Perry for his double life

"...but you sat there and let us help an evil scientist open an evil portal into an evil dimension, and you did nothing to stop us?!"

Perry and the boys being surrounded by Doof-2, Platyborg, and the Norm-Bots

"Wait a sec, I just realized something that was a conscious choice! You peed on my couch!"

An embarrassed Perry shrugs at Doof, assuring it was nothing personal against him

"That's when you should've put on your little hat, not NOW after we've gone into THIS MESS!!"

"Oh, for badness sake, you can hash all this out in prison."

"I don't want your pamphlet!"

Platyborg and a Norm Bot spotting the three trying to escape

Platyborg dives down to catch the trio

Platyborg turns around to catch them again

"He's coming back around!"

Oh for crying out loud!

"What, they didn't teach you how to get out of this in the spy school?"

Platyborg punches Perry in the face

Above the Doof-2's headquarters, both Doofenshmirtz's watch Agent P escape along with the boys while looking at a opened window latch

Close up on both Doof's

Doof-1 turns his head to Doof-2

Doof-2 turns his head to Doof-1

Platyborg paying for the taxi fare

The boys and Perry evading from the Norm Bots

"You're a secret agent, and you've been living with us this whole time?!"
Add a photo to this gallery

"We are not done with this conversation!!"

"So tell me, other-dimension me."

Doof-2 shows a picture of Perry the Platypus in pet mode to understand Doof-1's intentions.

(Uses a teacher stick to point the picture of Perry in pet mode): "What do you see here?"

Doof-2 shows the next picture of Perry the Playtpus as a secret agent to Doof-1.

"You know, I'm starting to see why you haven't become ruler in your dimension."

"Alright, Mr. "Eviler than Thou", how did you manage to take over the Tri-State Area, anyway?"

"I used an army of big, scary robots."

Doof-2 shows his massive army of Norm-Bots to take over the Tri-State Area of Doof-2's plan.

The Norm-Bots reveal their original heads

"We should do lunch sometime!"

The Norm heads revert themselves back to their armored bot style.

Doofenshmirtz-1 petrified after unveiling Doof-2's massive army to take over the Tri-State Area.

"True evil is born through pain and loss."

Doofenshmirt-2 puts his hand on chest to tell his backstory.

Doofenshmirtz-2 turns his head to his left side.

"You see, when I was a small boy back in Gimmelshtump..."

Doof criticizing Doof-2's backstory, as he finds it to be very ridiculous

"Well, how did you feel when you lost that toy train?"

"Since you have neglected to take over YOUR Tri-State Area..."

"I think I'll go over there and give it a shot myself."

"Wait, was that sarcasm?"

"Yeah, right there, I'm pretty sure that's my voice when I'm being sarcastic."

Phineas and Ferb get out of the trash cans.

"See you next week!"

"Boys, I thought you were in your rooms. Get inside!"

"And get your Dooferalls back on before someone sees you."

"If you need me, I'll be hiding in the basement."

Phineas-2 hugging Perry, believing him to be the Perry of their dimension until Phineas corrects him.

"Are there four of you in this room?"

"I see nothing, I have plausible deniability."

Perry feeling a little embarrassed about the topic of his litter box.
Add a photo to this gallery

The days are longer...

It's summer, every single moment is worth its weigh in gold!

... and cherry soda dripping down your chin...

Summer is ponds and pools and garden hoses, trying to beat the heat.

Summer, bicycles and roller skates and even just bare feet.

... every single moment is worth its weigh in gold!

It's ice cream cones and cherry soda dripping down your chin...

Perry the platypus walks to the living room

Perry the Platypus noticed the TV turned on in living room

"This is a message for other dimension Perry the Platypus."

"If you turn yourself in, I promise not to hurt your little friends."

Perry attempts to sneak out to turn himself to 2nd Doofenshmirtz in exchange for the boys' safety.

Unaware of Perry's reasons, Phineas disowns Perry after catching him trying to sneak away again, telling him to leave.

Perry is very depressed that he's been disowned by the boys for his double life.

As Perry walks through the rain to turn himself in to 2nd Doofenshmirtz, he laments over the loss of his relationship with the boys.
Add a photo to this gallery

Okay, we gotta be more careful than that."

The Norm Bot demanding to see the boys travel papers

Buford-2 greeting the boys after destroying the Norm Bot

"Are you part of the resistance?"

Close-up on Doofenshmirtz and his alternate evilself

"Actually, this is the Other Other-Dimensionator."

"...the Other-Dimensionator is back in the other dimension."

Doof-2 gives Doofenshmirtz-1 a glare at him

Doof-1 turns away from his alternate evil self

Doof-1 pressed a button on the Other-Dimensionator

Doof-1 stands back from the Other-Dimensionator

Zooms out to the Other-Dimensionator

A spark appears for the portal to open

"Er, now that I think about it, those two boys made some modifications to my design which may have allowed to, you know, to work."

Perry is trapped in a laundry bin

(both saying): "Ah, Perry the Platypus!"

Doof-2 approaches his captive in a laundry basket

Doof-2 gets closer to his prisoner in a wastebasket

"Now I need to hunt them down which may involve a little hurting."

Doof-2 gets closer to Perry again

And so does Ginger.

"well, we may have someone who can help you.."

Phineas wondering if they can generate enough energy to reverse the portal.

"Who made the topiary out of wild parsnips?"

"What are you two doing here?"

Baljeet tells Candace that they need energy to power up a new portal.

"Will somebody get rid of that topiary?"

Katie and Ginger removing the topiary