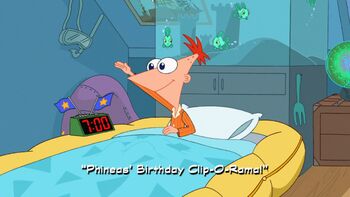 It's Phineas' birthday and for the special occasion, Ferb puts together a clip show of the gang's favorite moments. Meanwhile, Agent P has to stop Dr. Doofenshmirtz from using his 'non-inator' to pre-empt his brother's biography from appearing on television.

Phineas notices that Ferb isn't there.

All the most coolest Phineas' plans ever!

The egg-rendered Slushy Dawg on a stick.

Hey! There's a new kid in the party! Do you see her? She looks unfamiliar.

For all of us!

Candace and Phineas hugging.
Add a photo to this gallery

Perry's acrobatics dodge the ray.
Add a photo to this gallery

Hey, why am I in a painting?

We're monsters in a cavern.

Ew, I never realized how gross Doof's insides are! (Spoiler.)
Add a photo to this gallery

Retrieved from "https://phineasandferb.fandom.com/wiki/Gallery:Phineas%27_Birthday_Clip-O-Rama!?oldid=657997"
Community content is available under CC-BY-SA unless otherwise noted.