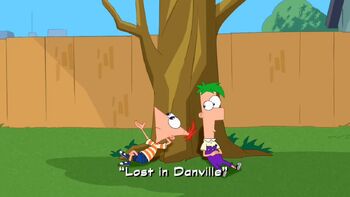 Phineas and Ferb find a capsule that falls from the sky that they want to open. Meanwhile, Doofenshmirtz is kidnapped by a guy named Professor Mystery whose nemesis is also Peter the Panda.

A mysterious capsule has fallen into the backyard

The boys waiting for another object to fall to no avail

"I guess this is the only one."

Ferb tries to open the capsule but to no avail.

"You know, sometimes, I feel like he just come here to get his assignments."

Unable to see anything through the capsule

Doofenshmirtz doing his blog in a flashback

Doof being attacked by the kidnapper

Doofenshmirtz blindfolded by the kidnapper

The kidnapper leaving footprints on the floor

Perry taking a closer look at the footprints

Too many pianos broken to open the capsule

Perry realizes that Doofenshmirtz has been taken to Seattle

A blindfolded Doof locked inside a small capsule, demanding an explanation

The hatch opens, revealing an old man inside

The gang is shocked by the man's words

Doofenshmirtz seeing an obsessive shrine to Peter the Panda

Doofenshmirtz looking on the other side to see the kidnapper

The kidnapper reveals himself

Doofenshmirtz is not surprised by this

A confused Mystery wondering if Peter never mentioned him to Doof

"What's with all the silence? It's very off-putting."

"Oh, this is gonna be a 'fun' conversation."

Phineas questions if the old man is really his future self

The fears are made worse when...

"Stop telling people that you're them from the future!"

The hamster starting to slow down

"That cannot be good."

Doofenshmirtz demanding to know why Mystery kidnapped him

Mystery revealing that he is Peter's nemesis

Mystery has invented his own -inator, but refuses to tell what it does

Mystery explains that he never talks to Peter, feeling that it would ruin his 'mystery allure' thing

Doofenshmirtz pointing out that Peter has to know what Mystery is up to, calling it common courtesy

Doofenshmirtz then wonders if Mystery has ever told anything to Peter

Mystery is silent on the matter, revealing that he has never talked to Peter before

Doofenshmirtz realizing that Mystery has a lack of communication

The black hole increasing in strength

Bernie gets sucked inside the black hole, along with Denise

The gang calling out Candace for help

Candace is shocked to see the black hole

Candace attempts to warn Linda of the event

"You're the last person I'm ever going to take advice, you nemesis stealer!"

"Even with musical accompaniment, you JUST don't get it!!"

Doofenshmirtz points out that Mystery is to blame for his problems with Peter, not himself.

Mystery firing up his inator

Mystery aiming the inator at Doof

Doofenshmirtz becoming more annoyed by this

"What did he give you that I couldn't give you?!"

"An evil monologue for one thing!"

Doofenshmirtz is finally fed up, demanding Mystery to tell Peter what his inator does

Mystery finally confesses that it's an Unexist-inator, designed to erase anything from existence

Doofenshmirtz is now worried that he will be erased from existence

Perry arriving to the rescue

Perry lands on the inator

Perry moving the ray away from Doof

The inator firing up a ray through the ceiling

The ray being reflected from the tower to an unknown location

The ray hits the capsule, erasing it and the black hole from existence

The gang (and the rest of the world) is now safe

Dragging Linda out, Candace is confused to see that the black hole is gone

In a coffee shop, Mystery finally confesses to Peter that he lost his parents to a black hole

Doofenshirmitz and Perry leaving back to Danville in peace

Phineas and Ferb invite their father, who is a polar bear, for snacks

Phineas and Ferb watching their alternate selves before the hole closes

They both decide that the two boys can't be themselves because the other Phineas had an extra white stripe in his shirt, and that their father is a polar bear.

"How did you get chorus girls in here?"

"Eh, they're union. They'll travel."
Add a photo to this gallery

To return to the "Lost in Danville" episode summary, click here.

Retrieved from "https://phineasandferb.fandom.com/wiki/Gallery:Lost_in_Danville?oldid=607028"
Community content is available under CC-BY-SA unless otherwise noted.