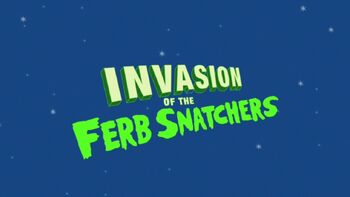 After an all night science-fiction movie marathon, Candace is convinced that Ferb is an alien and gathers evidence to prove it. The boys admit that they are doing something for an alien but that Ferb is not one. Her relief turns to excitement and then to frustration when her plan to bust her brothers is compromised by the alien disguised as Mom. Meanwhile, Dr. Doofenshmirtz is trying to sell an evil "-inator" under the guise of it being a cleaning device.

Ferb talking to his cousin

The Panic Room makes a cameo.

Proof positive: Ferb is an alien.

A "different silence than usual."

A hideous ball of goo.

Meap's friend coming out of disguise

To return to the "Invasion of the Ferb Snatchers" episode summary, click here.

Retrieved from "https://phineasandferb.fandom.com/wiki/Gallery:Invasion_of_the_Ferb_Snatchers?oldid=692931"
Community content is available under CC-BY-SA unless otherwise noted.