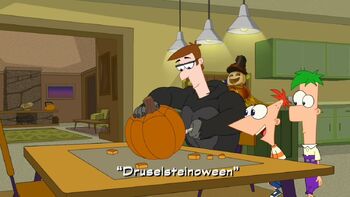 When Vanessa learns that her father has inherited a Drusselsteinian castle right next door to her she seizes the opportunity to throw the biggest Halloween bash ever. The whole town is there, including Phineas and Ferb, who act as the event's party planners and DJs. Meanwhile, Doofenshmirtz enlists Perry to help him find a large, hidden treasure that his Great Aunt has placed somewhere within the castle.

(Offscreen) "Welcome to my castle party!"

"This is a costume party?"

"Sir Grant of the Goth Table has arrived."

Vanessa hands him a mask

"I guess your party's gonna have two vampire queens."

"What are the chances, right?"

"How did you ever pull this off?"

"Well, my dad gave me permission to use his castle and then all I had to do was call the best party planners in town."

Phineas and Ferb are the party planners

"Ferb, you go get the 4:40 junction box hooked up behind the riser and I'll check up on the pumpkin crudities."

"These scalloped cheese slices should be staged directly across from the crackers, but overall, nice work."

"If I lose a slipper tonight, you know where to find me."

(offscreen) "There's some water on the floor over by the sally port."

"Monty should've been here by now."

Vanessa groans by the same people dressed up as Scarlet Pimpernel

Stacey arrives dressed as Scarlet Pimpernel like the others

Isabella is not happy.

She's barefoot without her slippers

Phineas throws off his shoes

They dance together barefoot

They bump onto the boss of O.W.C.A, Major Monogram

He noticed something which causes his eyes to get wide open

He sees Monty and Vanessa at the party

"With the daughter of my sworn enemy?"

He approaches to Monty and Vanessa

Stacy is the Pimpernel to avoid getting in trouble with the O.W.C.A. from Monty

Major Monogram leaves as he put his helmet on

"No thanks are necessary for that darned elusive Pimpernel!"

"Where did Monty go?"

"Oh, he's up there on the window ledge."

"Until next time, My Queen."

Monty tipping his hat to Vanessa

She blows a kiss to Monty

He jumps from the window ledge

"That was really kind of swashbuckley!"

Monty's hat is in the moat indicating he landed off-screen

Monty's arrival at the Halloween party

"Now, that is my boyfriend."

"Great googly moogly! Is that really what I look like?!"

"Okay, lessee, what do we have here?"

"And you must be the Princess of Meatland..."

"And what are you supposed to be, a kid in a sheet?"

"A platypus in a sheet?"

"PERRY THE PLATYPUS IN A SHEET?!"

(reading) ""By luck or by chance, you found the last clue."

"What does she mean, "turn the corner"?"

"What are you doing, Perry the Platypus?"

(offscreen) "The corner of her picture."

(offscreen) "With your little platypus hands, there."

Bags of cash fall out from the compartment

"I am comfortably well-off."

"Don't worry, Perry the Platypus, I won't forget about you."

"You'll be the first person I invite to my next piñata party."

"Are you the owner of this here building?"

"This area's not zoned for medieval castles."

"You're going have to pay a penalty fee."

"One canvas bag with a huge dollar sign on it."

"Thank you, here's your receipt."

"Well, at least I still have all this loot!"

"Can I see your permit for that moat?"

He hands a man a bag of cash

To return to the "Druselsteinoween" episode summary, click here.

Retrieved from "https://phineasandferb.fandom.com/wiki/Gallery:Druselsteinoween?oldid=693044"
Community content is available under CC-BY-SA unless otherwise noted.