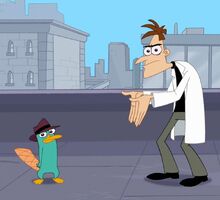 The fourth wall is the imaginary "wall" at the front of the stage in a traditional three-walled box set in a proscenium theater, through which the audience sees the action in the world of the play.[1] When a character makes direct contact to the audience from a film or television program or references his or her status of being in one, it is called "breaking the fourth wall."[1][2] The technique of breaking the fourth wall can be seen in various television programs, especially situation comedies, in animated cartoons, and in films.

Retrieved from "https://phineasandferb.fandom.com/wiki/Fourth_wall?oldid=714113"
Community content is available under CC-BY-SA unless otherwise noted.