Phineas and Ferb Wiki
Register
Don't have an account?
Sign In
Advertisement
in: Characters, Adults, Citizens of Danville,
and 4 more

The Du Bois (duh-BOYZ) Landscape Artists are a pair landscapers consisting of two people, Pierre Du Bois and Floraine, a Dutchman. Pierre insists that they are not landscapers, but "landscape artists". The name Du Bois is French and is pronounced just as it is spelled.

They are hired by Linda Flynn-Fletcher to remodel the Flynn-Fletcher house's backyard. She first believes it is pronounced "Doo-bwa" but later learns that it is pronounced how it is spelled ("Duh-boys"). They add plants to make the green grass look better. Most of the plants they add are cacti. Linda is not happy when she sees their unfinished work, but Pierre assures her that "great art takes time". They keep modifying the backyard until the final design. When Linda sees the final product, she is pleased with their work and calls it "sweet and adorable". This angers Pierre, who thinks that she is mocking their work. Floraine, on the other hand, points out that she really does like it. The enraged Pierre proceeds to take their work with them and leave.

Pierre Du Bois is the most vocal of the two and is rather sensitive about his artwork. He believes that "great art takes time". He is easily offended when his art is described as "sweet and adorable". Because Floraine usually speaks in Dutch, Pierre is the voice of the team and serves as Floraine's translator. However, Pierre does not actually understand what Floraine says.

Floraine is the other member. Unlike Pierre, Floraine is able to realize their client's disposition. Floraine prefers speaking in Dutch, but also knows how to speak in English.

Du Bois Landscape Artists - "It's just like it's spelled. It's French." 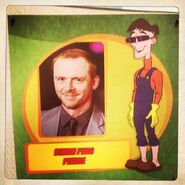