Clancy Brown (born January 5, 1959) is an American actor whose deep, resonant voice has led him to many roles as a villain and as a voice actor for animated series and video games. He is probably best known as Eugene Krabs on SpongeBob SquarePants, Lex Luthor in numerous DC animated projects such as Superman: The Animated Series and Justice League, Dr. Neo Cortex on the Crash Bandicoot series of video games and Brother Justin Crowe on Carnivàle. On Phineas and Ferb, he provides the voice of the Unnamed dream Sergeant in "Phineas and Ferb Get Busted", the voice of Santa Claus in "Phineas and Ferb Christmas Vacation!", and The Regurgitator in "Oh, There You Are, Perry". 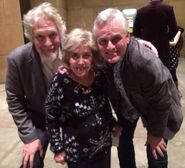 Clancy with Rob Paulsen and June Foray at the I Know That Voice World Premiere.
Add a photo to this gallery

Retrieved from "https://phineasandferb.fandom.com/wiki/Clancy_Brown?oldid=674412"
Community content is available under CC-BY-SA unless otherwise noted.