Terry the Turtle (2nd Dimension)
Peter the Pandaborg
several others...

"Tales from the Resistance: Back to the 2nd Dimension"

"Tales from the Resistance: Back to the 2nd Dimension"

Charlene is only mentioned twice in the deleted scene "Vanessa Meets Doof" as part of the bonus feature of the DVD, supposedly being divorced with Heinz. When their daughter Vanessa berated her father for banishing her boyfriend Tony Marzulo, she decides to go back to her mother's place by taking her father's blimp keys to get there. As Vanessa leaves for Charlene's, Heinz tells her to tell Charlene that she had fun though. (Phineas and Ferb The Movie: Across the 2nd Dimension)

Following Heinz's arrest and the Norm Bots' destruction, it is revealed that Charlene has her own penthouse during Heinz's reign, and had actually pretended to be divorced with Heinz for several finance advantages, since she actually shares much of Heinz's evil. With the Doofenshmirtz reign of terror having ended, she plotted revenge against the Resistance. It's also revealed that she is responsible for the capture of many of O.W.C.A.'s agents (including Pinky the Chihuahua and Peter the Panda) and their transformations into cyborgs during Heinz's reign, similar to how Heinz defeated Perry the Platypus and transformed him into the cyborg he is now. Upon learning this, Resistance leader Candace Flynn decides to investigate the situation, and coerced Heinz into helping her. However, having expecting this as part of her plan to free Heinz, Charlene has her cyborgs to trap Candace, Phineas, and Platyborg in her penthouse, planning to turn both Candace and Phineas into cyborgs. Charlene is also annoyed of Heinz focusing his attention on his childhood toy train Choo-Choo, so she just throws it away, resulting Heinz to go back to his evil ways. However, Ferb manges to free the three by pretending that he was turned into a cyborg by Charlene, allowing the Resistance to infiltrate Charlene's penthouse. As the Resistance manage to free all the agents of their evil programming with fedora hats equipped with magnetic deprogramming chips, Candace engages into a bo staff fight with Charlene and defeats her. Charlene was then about to join Heinz in Resistance custody, but an arriving Vanessa tricks Candace into letting her have a moment with her parents, which allowed the Doofenshmirtz family and Pandaborg (the only animal cyborg who wasn't freed of his evil programming) to escape in a hover car driven by Tony himself. As the notorious Doofenshmirtz family escape, Vanessa introduces Tony to Heinz and Charlene; the former recognizing him as the boy he banished earlier because of his interest towards Vanessa. ("Tales from the Resistance: Back to the 2nd Dimension")

Charlene turns out to be an impressive shooter and a bo fighter, as she was able to briefly defeat Candace (who is also a bo fighter herself) in combat.

Just like her husband, Charlene is extremely intelligent, as she planted a fake divorce with him to ensure of their family's safety and finances just in case Doof would be overthrown and imprisoned. She was also able to initiate a series of attacks to trick the Resistance into freeing Doof.

It also seems that Charlene is able to understand and inherit some of Doof's skills in robotics, as she was the one who created the giant mechanical ants and turned several of O.W.C.A.'s animal agents into Animal Borgs with the same technology Doof used to create his Norm Bots and turn his nemesis Perry into Platyborg.

Out of the most of the 2nd Dimension characters, Charlene has the most personality differentiation from her original counterpart, though she dresses exactly like her first dimension counterpart does. As opposed to being good-natured and sarcastic, Charlene is very evil and intelligent, more so than her husband after he was defeated. At one time, she was able to formulate an attack at Danville Park as a successful diversion in order for Candace to bring Heinz to her penthouse in order to free him. Unlike her 1st Dimension counterpart, she only pretends to be divorced to her husband.

Despite her being a darker and more sinister version of the 1st Dimension Charlene, she does tends to have a certain flaw and lighter side: she reacted in shock when one of the freed agents messed up her manicure, something which distracted her long enough for Candace to defeat her in combat. In spite of her evil ways, she genuinely loves Heinz, since they had pretended to be divorced for financial advantages during Heinz's reign; she also truly cares for their daughter Vanessa, who was willing enough to help both her and Heinz escape from Resistance custody.

Tales from the Resistance: Back to the 2nd Dimension 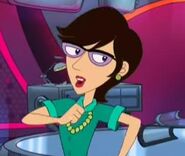 Retrieved from "https://phineasandferb.fandom.com/wiki/Charlene_Doofenshmirtz_(2nd_Dimension)?oldid=681142"
Community content is available under CC-BY-SA unless otherwise noted.