Phineas and Ferb Wiki
Register
Don't have an account?
Sign In
Advertisement
in: Characters, Adults, Citizens of Danville,
and 4 more
English

View source
watch 01:39
Who is Charlene Doofenshmirtz?
Do you like this video?
Play Sound

About the same as Linda

"I Scream, You Scream"

Charlene Doofenshmirtz is the ex-wife of Dr. Heinz Doofenshmirtz and shares custody of their daughter, Vanessa. She didn't divorce Heinz because he was evil; in her words, they just didn't get along very well and wanted different things. Whenever Vanessa tries to tell her that Heinz is actually evil, Charlene is adamant that no one can be evil. In contrast to Heinz's agitation with her, she is actually very civil in his presence and talks of and to him as if they were still on relatively good terms ("I Scream, You Scream", "Hail Doofania!")

Charlene has short dark brown hair and a slightly yellow skin tone. Her body-shape is similar to Linda's. She wears a green polo shirt with dark green buttons, black shoes, and blue jeans. She also has a yellow pearl necklace, a pair of yellow earrings and purple glasses.

She is a bit sarcastic with her ex-husband, and despite talking with him in good terms, she tends to make sarcastic comments about Heinz's ineptitude ("This Is Your Backstory", "Hail Doofania!"). She is also very innocent in subjects such as Heinz's schemes and -inators ("I Scream, You Scream") and never believes the schemes that her ex-husband has made, nor does she believe Phineas and Ferb's amazing inventions ("Finding Mary McGuffin").

However, she can be caring towards her daughter Vanessa, even personally encouraging her to donate to charity ("Finding Mary McGuffin").

I Scream, You Scream

Rollercoaster: The Musical! during Carpe Diem 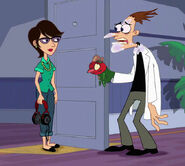 Steampunx in Professor Elemental Future Past

Tales from the Resistance: Back to the 2nd Dimension: see Charlene Doofenshmirtz (2nd Dimension)