Guests who registered at one of five locations within Epcot used a F.O.N.E. - or Field Operative Notification Equipment - supplied by sponsor AT&T in 2014, though the F.O.N.E. was later replaced by the Play Disney Parks smartphone app), to become agents of O.W.C.A. and help Perry the Platypus defeat Dr. Doofenshmirtz through seven country pavilions represented in the World Showcase area - Mexico, France, Germany, Norway, United Kingdom, Japan and China - getting clues on their devices for each case, and also scouring for evil inators. Each showcase country features Phineas and Ferb on vacation with their family and Perry (in his mindless pet mode) being held up because of one of their ideas.

On December 3, 2019, it was announced that a DuckTales-themed experience will be replacing the Agent P theme sometime in the future.[1] The attraction officially closed on February 16, 2020.

Items You May Have Gotten From Missions

Things You May Have Seen On Missions

Dr. Doofenshmirtz gets his come-uppance at the Germany pavilion.

Perry hides amongst roses at the Germany pavilion. 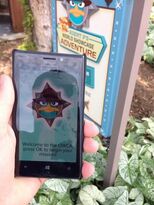 A look at the new Nokia SmartFONE used in June 2014.

This article is a stub. You can help Phineas and Ferb Wiki by expanding it.