Phineas and Ferb Wiki
Register
Don't have an account?
Sign In
Advertisement
in: Characters, Animals, Agent stubs,
and 4 more
English

L.O.V.E.M.U.F.F.I.N. (along with the other agents)
Main nemesis unknown

"Traffic Cam Caper"
Agent O, is an owl that works for the O.W.C.A.; it is brown in color. Its first name is unknown, not much is shown of it but it was seen in "Traffic Cam Caper". It was injured, along with Agent D by Dennis the Bunny (a rouge agent) and had its left foot in a cast ("No More Bunny Business"). In "Phineas and Ferb Save Summer", it is instructed to find out "Who's who?" 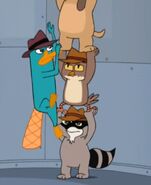 This agent article is a stub. You can help Phineas and Ferb Wiki by expanding it.