Jeremy Johnson (Mitchel Musso) is the love interest of Candace Flynn, and the brother of Suzy Johnson. He often comes over to the Flynn-Fletcher House to enjoy Phineas and Ferb's large projects. In an interview with Mitchel Musso, he revealed that Jeremy returns Candace's feelings for him. Also, if Candace is angry about her brothers, once Jeremy comes for a visit, Candace's feelings seem to be soothed. His normal greetings to Candace tend to be "Hey, Candace", (to which she responds: "Hi, Jeremy.") and "Uh... Candace?" He works part-time at the Mr. Slushy Dawg fast food chain, which Candace frequently visits just to see him. He is also the lead singer and guitarist for the band Jeremy and the Incidentals. Candace's future son, Xavier, looks a lot like Jeremy. Xavier, Fred and Amanda could be sired by Jeremy.

Jeremy is a fairly relaxed individual, not letting himself getting hung up on the little details. If he feels nervous whenever he asks Candace out, it never really shows. He enjoys Phineas and Ferb's Big Ideas, from downloading the PFT song to going to the car wash with his mom's car.

Candace and Jeremy secretly love each other.It is known that Jeremy likes Candace because, preceding the Night of the Falling Stars Girl's Choice Dance, Jeremy was waiting for Candace to ask him (along with the time Jeremy called Candace to go on a date, when they hung up, both of them said "yes!"). Sometimes Candace thinks that she's on a date with Jeremy when they hang out. Jeremy almost always wants to hang out with Candace. He has asked Candace out on a date several times now. ("Out to Launch", "Phineas and Ferb Get Busted" although that was just a dream, "Chez Platypus", "Journey to the Center of Candace") Candace and Jeremy are currently in a relationship, though it was never officially established that they became a couple. Creators Dan Povenmire and Jeff "Swampy" Marsh have stated that that episode is set to air during Season 3.

In Backyard Aquarium, Jeremy is supposed to call Candace. Through most of the episode, the are calling each other at the same time.

Jeremy also signed Candace's arm cast with a drawing of their initials together in a heart. ("De Plane! De Plane!")

In the Museum, Jeremy pointed out to Candace that a fossil with their initials carved together in a heart was his favorite exhibit ("It's About Time!")

Jeremy doesn't give Candace a nickname because he likes her name. ("The Baljeatles")

In a Disney Channel promo advertising the series, Mitchel Musso, the voice of Jeremy, confirmed that Jeremy really does have feelings for Candace.

Although he often seems confident, Jeremy is just as nervous about wanting to date Candace as she is with him. He canceled one of their dates in order to earn more money for a big surprise, and asked Phineas and Ferb for help when she entered them in a big televised dance contest. ("Cheer Up Candace", "Nerdy Dancin'")

During their winter vacation, Candace tricks him into writing a letter to Santa so she could see what he wanted for Christmas. Candace's plan fails as he gives his letter to a postman. On Christmas Eve, he tells her that he sold his guitar to pay for the earrings he bought for Candace, and she gives him what he wanted for Christmas, a silver guitar. They embrace each other, bonding closer for the shared experience.("Phineas and Ferb Christmas Vacation!")

Jeremy may not understand that Candace is out to get Phineas and Ferb in trouble, as she quickly sets her threats aside whenever he shows up ("Got Game?") or when Jeremy is directly involved with their plans. ("Nerdy Dancin'") Though there have been several instances where Candace focuses on getting them in trouble despite that fact that she is with Jeremy. ("Journey to the Center of Candace";"Does This Duckbill Make Me Look Fat?" ) If he is aware of her distress towards Phineas & Ferb, he rarely shows it, and in rare occasions where he does, he will attempt to talk Candace out of it and convince her to have fun with it, much like Stacy does. ("Flop Starz")

In "The Lizard Whisperer", at the beginning if you look closely it shows Jeremy has a picture of Candace ("The Bully Code") in his guitar case.

Jeremy calls Suzy his favorite girl and is completely unaware of the evil side she shows towards Candace. Although she revealed an above average intelligence for a pre-schooler to Jeremy once, he was too distracted by Candace fleeing to fully catch this inconsistency. ("Comet Kermillian", "One Good Scare Ought to Do It!")

Jeremy and Coltrane appear to be very good friends, like how Candace and Stacy are good friends, though not much is known about their friendship. ("Let's Take a Quiz", "The Baljeatles")

Stacy is shown to be friends with Jeremy, and also nicknamed her as "Staceru", which angers Candace. ("The Baljeatles")

Jeremy is known to like their inventions, and has stated he thinks they're pretty cool. He once came to Phineas and Ferb for help on dancing. ("Nerdy Dancin'") However, he has stated to have preferred Slushy Burger over their attempt at organizing a romantic dinner. ("That Sinking Feeling")

Jeremy has a good friend attitude towards Jenny but currently not is much known about them being "BFF's" because Jenny does not appear in the series much as the other teens.

Jeremy may be the possible father of Candace's future three children (Amanda, Xavier and Fred). Xavier and Fred share his long neck, and Xavier shares his blonde hair. Fred could be a step-child, or his name could have been chosen by Jeremy, as in some episodes ("The Best Lazy Day Ever", "Swiss Family Phineas, "Spa Day") Candace says "...and have monkey-kids and name them Xavier and Amanda!" or "and have two kids — Xavier and Amanda." without mentioning a "Fred."

In "Does This Duckbill Make Me Look Fat?", it is revealed that he is Jeremy's favorite platypus.

Jeremy interacted with them once. He helped Doofenshmirtz summon the aliens and visited Monogram where he nearly exposed the animals' secret. ("The Lizard Whisperer") 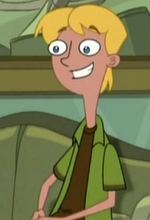